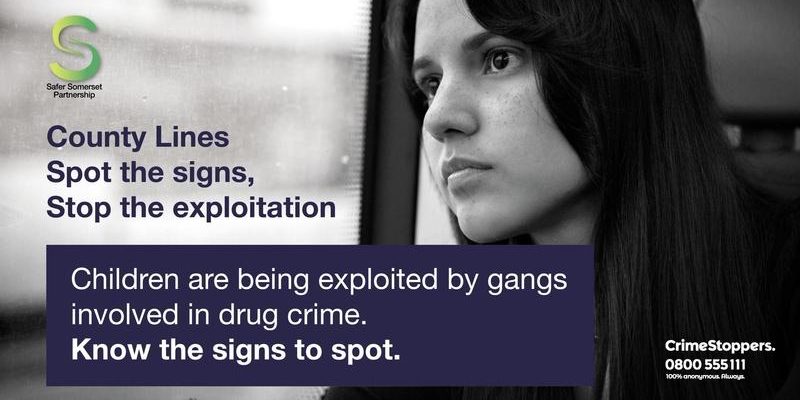 Drug dealers who brought heroin and cocaine to Somerset from London have received prison sentences totalling more than 20 years for their role in a criminal enterprise estimated to be worth hundreds of thousands of pounds.

Three men and two women were sentenced at Taunton Crown Court (March 21st) for conspiracy to supply class A drugs.

The convictions followed a joint operation between Avon and Somerset Police and the Metropolitan Police targeting county lines drug supply.

Officers collected evidence showing all five defendants were involved in the supply of cocaine and heroin.

The group were found by police to have brought approximately 5kg of illegal drugs to Taunton, Bridgwater and Yeovil from the capital between August 2020 and February 2021.

Jurors on Thursday 11 November found 31-year-old Sonny Sheppard, of Blackwell Lane in London, guilty of two counts of conspiracy to supply class A drugs. He was sentenced to 15 years in prison.

Four other people pleaded guilty to two counts of conspiracy to supply class A drugs and were also sentenced today:

Judge James Townsend said in court the defendants were involved in a sophisticated, well-organised and large-scale county lines supply operation, before sentencing them according to their level of involvement.

He described the operation as a menace bringing intimidation, misery and violence to young people in Somerset.

I would like to highlight and praise the public for their support in bringing this case to court; without their information and engagement, DS Paul Cobb and his diligent team would not have had the opportunity to target this group and take a county lines drug group out of action.

This drugs line had been a problem that we had been aware of for some time, and through partnership working between Avon and Somerset Police and the Metropolitan Police, we were able to target them and ensure they were robustly dealt with in relation to the harm they have caused to our local communities in Yeovil, Bridgwater and Taunton.

We hope the prison sentences handed out today act as a warning and deterrent to anyone involved in the supply of drugs and give confidence to the public that their reporting leads to positive police action.