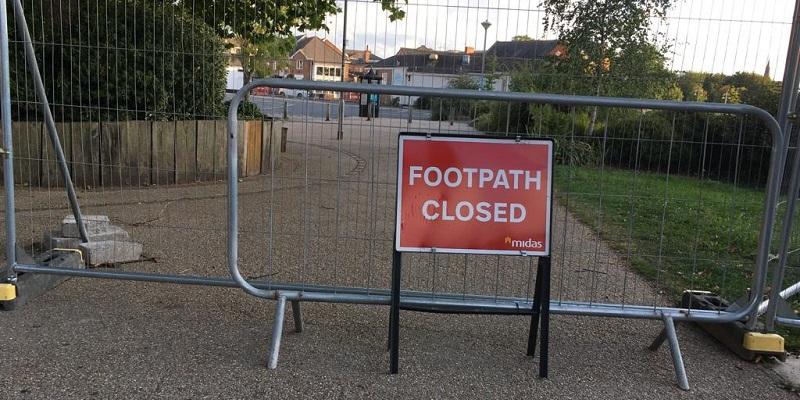 Tone News has received a letter from a local resident in the Coal Orchard area of Taunton who is not happy with the recent closure of the riverside footpath:

On Tuesday 27 August without warning, the Council closed the footpath between Morrison’s pedestrian footbridge and the North Town Bridge. It was closed on the grounds of “health and safety” since it is adjacent to the Council’s proposed Coal Orchard development.

This footpath is an important link between the east of the town and the town centre. It is also part of a pleasant and uninterrupted walk along river and canal to Goodland Gardens and beyond. But most importantly, it is the only direct pedestrian route to the Riverside Place shops now that the Coal Orchard car park has been closed.

The closure has caused inconvenience to pedestrians by introducing lengthy diversions and these diversions have drastically reduced the footfall through Riverside Place. The traders there are concerned that the reduction in passing trade will seriously affect their livelihood. This closure is scheduled to last 18 months and with the loss of 100 car parking spaces, trading is going to be difficult.

A petition requesting the Council to re-open the footpath has received over 1000 signatures and this will be presented at a Council meeting in October. In the meantime the Council has been challenged under Section 31 of the Highways Act 1980 to provide evidence that the footpath is not a public right of way as it claims.

The Act states a footpath that the public have enjoyed as a right and without interruption for a period of 20 years is deemed to have been dedicated as a highway. This is unless there is sufficient evidence that there was no intention during the period to dedicate it as a right of way. On this basis, the Council would have difficulty proving this because they have positively encouraged pedestrians to use it for over 20 years.

I believe the Council has not followed the correct procedure for closing the footpath and have not given the public the right to formally object. I therefore believe they have acted unlawfully.

There is much talk from the Council of “engagement with the community”. Well engage with us now and re-open this footpath.

If you have any thoughts, comments or feedback on this letter, you can engage with us on our Facebook page.