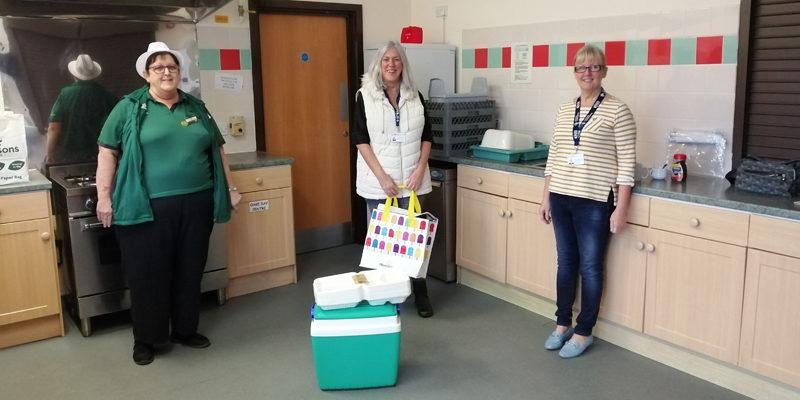 Somerset Village Agents partner with Morrison’s to provide free meals for people in and around Oake!

CCS Village Agent Christine Brewer has teamed up with the Community Champion from Morrison’s in Taunton, starting a fortnightly community kitchen based at the Oake Community centre.

Morrison’s are providing all of the food free of charge, and Kath West – the Morrison’s Community Champion – is not only involved with the food provision, but also has amazingly committed to the cooking delicious and nutritious meals, as she has level 3 in food hygiene.

Kath is delighted to be part of the scheme and tells Tone News:

I am thrilled to be part of this professionally with my role at Morrison’s but also personally, cooking meals for people in my local community. We want to be able to deliver hot meals to those in need throughout the difficult winter months and hopefully make people’s lives a little easier.

Keeley Rudd, CEO for CCS (Community Council for Somerset) went on to say:

We would like to extend a HUGE thank you to Morrison’s for making this possible, going over and above with Kath’s commitment to ensure the project’s success.

This will have a positive impact for communities in and around Oake, and forms part of the bigger Somerset Food Resilience Taskforce, where we are working with many partners like Morrison’s and Somerset County Council, to increase food security for residents in Somerset.

The Oake Community Kitchen will deliver on Wednesdays, and cover Oake, Hillfarance, Bradford on Tone, Cotford, Halse and Preston Bowyer.

If you would like to offer help, or want to register yourself or someone else for a hot meal delivery, contact Village Agent Christine Brewer on 07535 276680 or go to  Oake Post Office where they can leave their names, or the name of somebody (with their consent) who would appreciate a meal.

Morrison’s have also dedicated a trolley in their store for toys/chocolates/biscuits which is being donated to the Community Council for Somerset to put in the Christmas boxes that are going out to clients mid December.