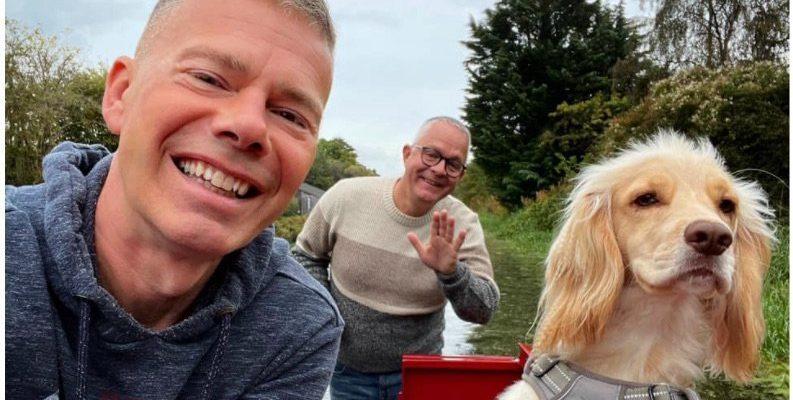 Foxes Afloat YouTuber has landed a show on Tone FM

Foxes Afloat YouTuber star Colin Dobson-Fox and his partner Shaun have landed themselves a weekly show with our friends at Taunton’s 107.8 Tone FM

In 2018 former Trax FM, Rother FM, and Radio Aire Presenter Colin Dobson-Fox (Front left) and his partner Shaun (Rear), decided that it was time to make a change. So they sold their house, a business, gave up their jobs and moved onto a 57ft canal narrowboat called ‘Silver Fox’..

After making the move they began to explore the UK’s network of rivers and canals, along with their dog Otis, whilst sharing their adventures with what has now become a very loyal 140,000 subscribers on their YouTube Channel “Foxes Afloat”.

In recent months the pair decided that the time had come to leave the boat and Colin was keen to make a return to his first love of Radio so through his channel, and a livestream, explained this to the audience, asking “if anyone could help, to get in touch”.

Watching that livestream at the time was Tone FM Station Director Patch Jobson, who immediately made contact offering Colin the opportunity to host his own show on Taunton’s 107.8 ToneFM.

After the initial conversations, Colin accepted the offer from ToneFM, and on Sunday April 10th will head back into the studio to host a brand new show “The Sunday Supplement” from 2-4pm.

Local radio has been my greatest love since I first first got involved as a teenager. Producing and presenting community based, engaging, and entertaining programming is just so enjoyable. I can’t wait to get behind the microphone at ToneFM and get to know the people of Taunton.

Listeners within the Tone FM TSA will be able to tune in via 107.8fm, whilst those outside can listen live via several different channels. This includes tonefm.co.uk, the Tone FM App. which can be downloaded from either App.Store, Tunein, RadioPlayer or by simply asking their Smart Speaker to “Play Tone FM”

Colin joining Tone FM is another step of redevelopment for the organisation which saw a new Senior Leadership Team take custodianship of the station in November of 2021 and then transition it into a CIC.

This was done with the aim of firmly placing the station back at the heart of the community, whilst ensuring it continued to create a truly unique broadcast mix.