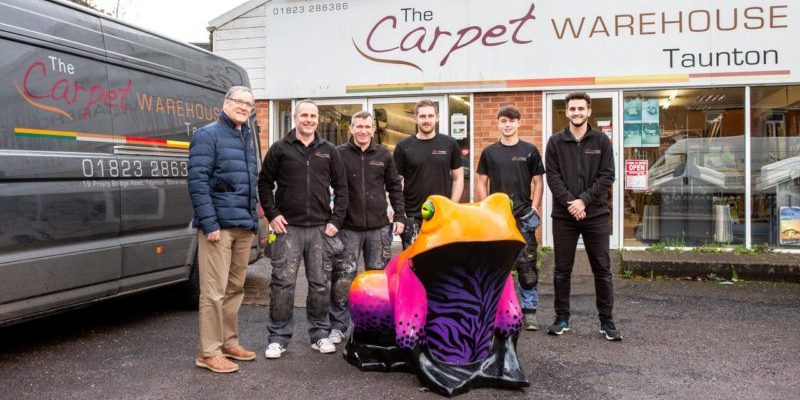 Acorn ward is now the home of a giant toad!

The children’s ward at Musgrove is the new home for one of the giant toads which made up part of the incredibly popular ‘Toad Trail’ and has been kindly donated by local business, The Carpet Warehouse which is based on Priory Bridge Rd.

Brothers, Jason & Paul Thompson paid £3000 for the Toad after it was auctioned off at Hestercombe House last summer. Jason has told Tone News:

“We wanted to show our support and give something back to the community in the same way as we did with the ‘Deane Dragons’ a few years ago, so we bought a Toad!”

The Taunton Toad Trail was launched by the League of Friends of Musgrove Park Hospital to help generate funds for the Bracken Birthing Centre appeal, of which it raised in excess of £15,000 and proved to be a real hit, especially with children.

Jason went on to say:

“Having seen how the kids responded when they saw the Toads, Paul & I thought that it would bring a big smile to the faces of those who need to spend time in Acorn Ward.”

As for the rest of them, tone News can reveal that Killams Toad and Wisdom Toad  – have stayed with their sponsors  at Killams Green and Great Western Hotel respectively; Daisy Toad and Toad in the Hole were bought as surprise Christmas presents!

Lightning McGreen was bought by the family of the schoolgirl who designed it, whilst Quantock Toad has stayed with Viridor and will either be on display in their reception or doing a tour to encourage recycling and support wildlife.

LoFToad has been bought by Richard Huish College and will be on display at the College having been redesigned and painted by college students. Elemants of Toad has ‘hopped’ all the way down to Exmouth and has pride of place on the first floor balcony of a flat overlooking the Marina!

The original Toads, which were in the Shopping Centre and are now in Victoria Park are being renovated to bring them back to their former glory ready for next summer.

Finally, Gregory the Willow Toad, that could be won by buying a £1 raffle ticket, was won by a person from Shapwick who after displaying it in her garden donated it to St Margaret’s Hospice where it is proudly on display.

Peter Renshaw, Chairman of the League of Friends Musgrove Park Hospital thanked everyone who had been involved with the Toad Trail and helping to raise funds for the 60th Anniversary Appeal to refurbish Bracken Birthing Centre.