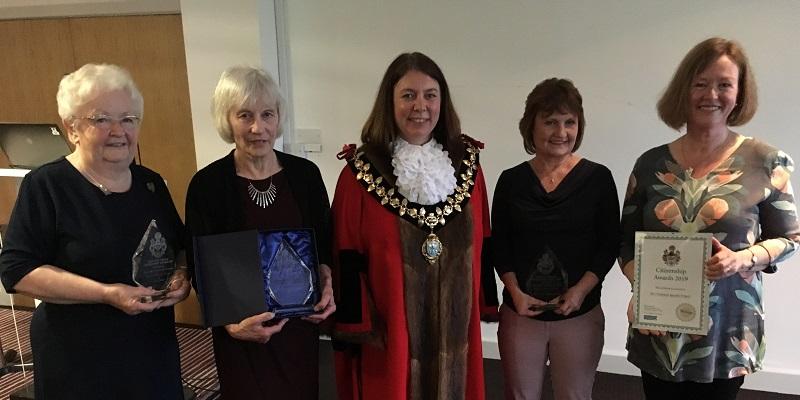 The Taunton Deane Citizenship Awards have taken place at the Cooper Associates County Ground, honouring those who have made a ‘real difference’ to their community.

Since the 1980’s, the annual ceremony has been hosted by the serving Mayor and was the brainchild of John Meikle MBE, who felt that he was meeting people every day that were also working hard for their local community but not getting any recognition.

Not only do they bring a smile to children and their families, they also bring the community together as people love to make donations and help out and adults with learning difficulties also help collecting and sorting the donations.

Jenny has been the key volunteer of Walk Well in Taunton Deane for many years. It’s a free health walk programme that now attracts more than 40 walkers per group.

Jenny plans the programme, discovers new routes and keeps the programme varied and interesting. In 2017, Jenny also set up a lunch club when she realised that many of the walkers lived alone.

Now, the group attend the theatre, cinema, curry nights and skittles and her work has helped reduce loneliness across the area. Last year, more than 3,300 people took part.

Hazel has used her piano skills to the benefit of thousands of people. Not only has she accompanied Taunton Deane Male Voice Choir for 16 years, she will also help members of the choir if they are sick or in need of care.

Hazel looks after the local elderly too, driving them round, looking after their gardens and pets and also volunteers at the Salvation Army and is Captain of the Neroche Handbell Ringers.

Somehow, she still finds the time to play the piano at Taunton Baptist Church and Musgrove Park Hospital.

Mr Rideout was nominated for his selfless hard work collecting rubbish around North Taunton. He works entirely voluntarily and is well known for his efforts in keeping the area looking tidy.

Bridget Clark, Sue Ingham and Pauline Drury have built a fantastic group raising awareness of Diabetes, and offering help and support. From public meetings, through to walks through the countryside, they’re battling social isolation as well as the disease. They’re invited to many local events and work with Musgrove Park Hospital to influence the treatment of diabetes.

Known as Sam, he’s worked tirelessly for veterans and former service personnel. This has included raising funds for Victory House in Taunton, helping to keep homeless ex- service men and women off the streets, the Taunton Veterans Breakfast Club, school visits, the Poppy of Honour, organising a trip for veterans and has now even trained as a psychological first aider to help those with PTSD.

Nancy has made a dramatic difference to her, relatively new home of Wellington. She’s been producing, directing and even moving scenery – and created the play for the Annual Christmas Extravaganza. Nancy has also been a major fundraiser for the Wellington Monument restoration project.

Richard has been keeping the verges and pavements of Staplegrove clean and tidy since 1990! His time and money has gone in to making sure pedestrians can walk safely and the area looking neat and tidy.

Sue is one of the Diabetes UK volunteers who’s been singled out for special praise. Sue regularly speaks to audiences across Somerset about living with Diabetes, helping make the ‘Know Your Risk’ roadshow such a success. Her dedication to raising awareness of new technology led to the NHS adopting a system called FLASH on prescription for those with Type 1 diabetes.

Wellington cricket club is vital to so many people and, as well as the senior and junior teams, now has a women’s team for the first time. Their huge amount of work for the local community does not get the recognition it deserves, said their nomination.