Restaurant in Taunton? Why not try the best wrap in town! 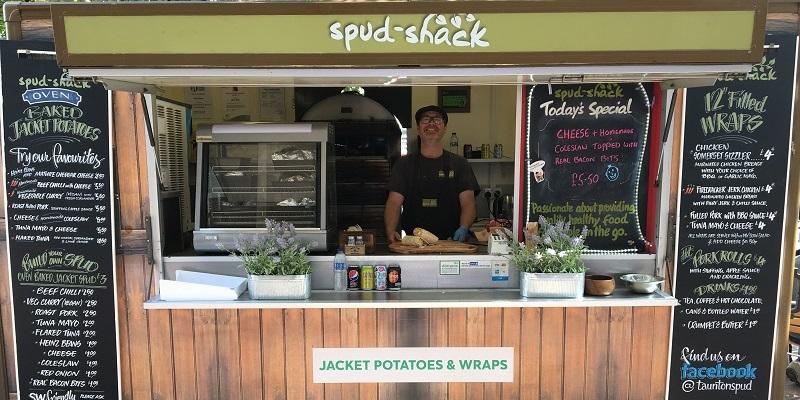 Restaurant in Taunton? Who needs one to satisfy your lunchtime munchies when you can tuck into a delicious, freshly made wrap!

I consider myself a bit of a foodie and often find myself eating out for lunch, either because I’ve been too busy, or I am just not organised enough to make a packed lunch.

Deep down though, it’s probably more likely that I eat out because we are lucky in this town to have so much choice!

Tone News and Tone FM are based in the Market House so I am out and about in the town centre quite a lot and what I have noticed, is the growing trend in filled wraps.

You’ve probably seen adverts for these all over the place, in fact, just about everyone seems to doing them so, I decided to try as many wraps, from as many places across Taunton as I could to find which one I thought is the best.

Anyway, I’m pleased to announce that the Tone FM ‘Best Wrap in Town’ award goes to ‘Spud-Shack’ for its ‘Somerset Chicken Sizzler’.

Now you want to know why it has won don’t you?

I think its brilliant that a small local independent like the Spud-Shack can take on the big guns and can beat them so convincingly, even though it’s not actually a restaurant in Taunton.

I caught up with Mark Watts who owns and runs the Spud-Shack to give him the news, and he said: ‘I’m totally shocked! I developed the Somerset Sizzler wrap when asked by Somerset County Cricket Club to provide catering for the World cup and 20/20 games.”

“Like any new product I launch, I tried loads of different recipes and combinations, asking my friends and family to provide me with feedback. Winning an award like this after only a few months is amazing, I’m humbled by the whole experience. I’m working on other wrap fillings which are likely to be rolled out in the coming months”.

So there it is, the Best Wrap in Town Award 2019 goes to the Spud-Shack for its Somerset Sizzler. If your haven’t tried one yet, Mark and his stall can be found outside Nat West Bank, Tuesdays-Saturdays.