Taunton through the ages display 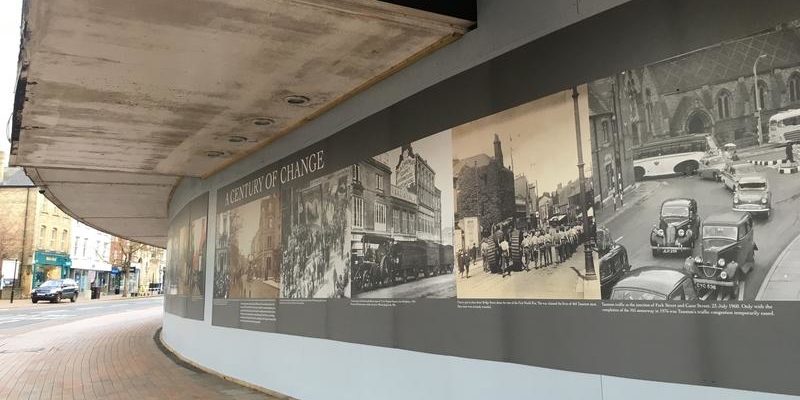 Have you seen the Taunton through the ages display?

Taunton through the ages is a graphical timeline illustrating Taunton’s history from the Anglo-Saxon period to the 20th Century and is now being displayed on the front of the former Debenhams store in North Street.

Have you seen the Taunton through the ages display yet? Watch the video below:

Somerset West and Taunton (SWT) Council’s Emergency High Street Recovery Group in Taunton, which consists of local businesses representatives and ward councillors, commissioned the timeline with funding from the Emergency Town Centre Recovery Fund to improve the appearance of the town, attract visitors and boost the local economy.

The timeline has been collated and arranged by the South West Heritage Trust using early oil paintings, watercolours, engravings and vintage photographs within its own archives and that of the Somerset Archaeological & Natural History Society.

50 panels have been assembled into linear sections to reflect seven significant themes in Taunton’s development.  Between them, they depict historic churches and buildings, personalities including Judge Jeffreys and the Duke of Monmouth, markets of old and one of the back-street slums that Victorian Taunton was keen to conceal.

When the Emergency High Street Recovery Group and I heard that the Debenhams flagship store would be closing, we wanted to do something positive for the town to improve its appearance and increase footfall through the unveiling of this incredible exhibit.

It is great to see the fruits of our labour and I’d like to extend my thanks to all the stakeholders involved, especially South West Heritage Trust for their design input.

We hope it supports local shops and businesses as well as highlighting Taunton’s rich and turbulent past which is perhaps less well known.

The installation will be on display until such time as the former Debenhams store is reoccupied.

Watch the Taunton through the ages display in the video below: