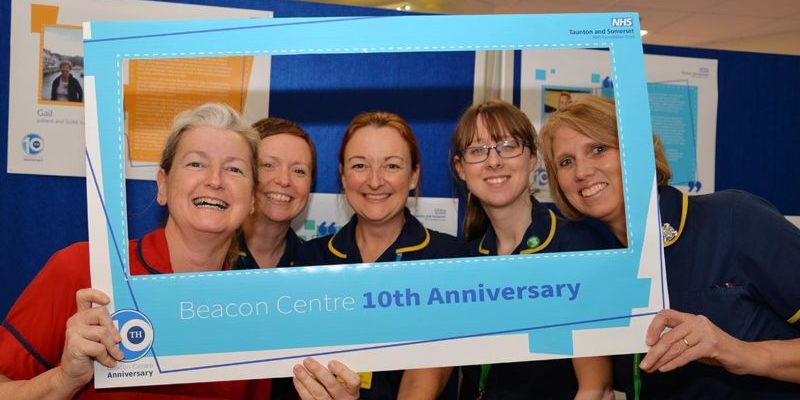 Staff, patients and families have been celebrating the 10th anniversary of the Beacon Centre. The celebration event served as a thank you to the team behind the centre, and the charities which support it each day.

The Beacon Centre provides cancer treatments to patients across the county, and it was the first standalone treatment facility of its kind for 20 years, making the hospital a centre of excellence for cancer treatments.

Guests in attendance were able to walk a timeline of achievements over the past 10 years, including placement in the national top ten of NHS trusts providing excellent cancer care to patients in 2011, being the first hospital in the UK to implement a brand new breast radiotherapy technique in 2014, and officially opening a new radiotherapy CT scanner in 2018.

Exeter Chiefs and England international rugby player Ben Moon was also present, after choosing the hospital’s official charity Love Musgrove, and its campaign for the Beacon Centre, as one of his official testimonial year charities.

Ben’s father had treatment and went on to tell Tone News:

“My dad (my hero) was in the Beacon Centre for a short while whilst having his treatment. During the darkest days of his life he still managed to find some happiness in there with a high level of support and care.

“The staff at the Beacon Centre really do make a difference both to patients and families alike. I will always be thankful to the Beacon Centre for the reassurance and help they provided when he, and we as his family, needed it most.”

Over the last 10 years, the staff have rightly won many awards for high quality care, customer service excellence, research and innovation. They were also the first cancer centre in the UK to appoint a Macmillan consultant radiographer who specialises in the late effects of radiotherapy on patients.

There has also been a positive impact on the environment with an estimated 410,000 miles by car and 177 tonnes of CO2 saved by patients not needing to travel to Bristol.