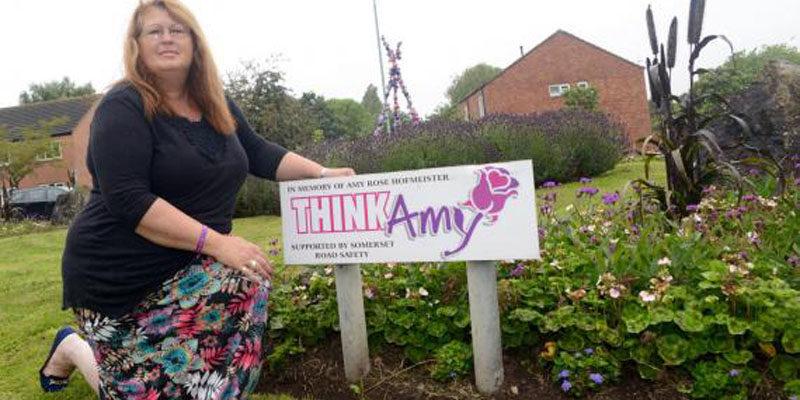 10 years ago, our community was shocked and horrified at the news breaking one evening of a 13 year old schoolgirl being killed outright close to the Blackbrook Leisure Centre.

Listen to our EXCLUSIVE interview with Jane Hofmeister at the bottom of this page.

A tragedy of catastrophic proportions, which took the life so unavoidably of Amy Hofmeister who was a student at Bishop Fox’s School by two drivers racing at high speed along Blackbrook Way.

Amy, who lived close by, had called her mum at work shortly before the accident to let her know she was going out for a bike ride with her friend.

It was the last time Jane spoke to her daughter.

The events which unfolded shortly after that phone call were devastating, not only to the family of the ‘happy go lucky’ teenager, but everyone that knew her.

As a parent, I can’t even begin to imagine the feelings that Jane has to deal with every second of every day and during the many interviews we have done over the years, she refers to it as her ‘life sentence’.

Now, Jane’s life is about promoting the charity she set up in her daughter’s name THINK AMY which provides education and promotes safe driving.

She would like to pass on her heartfelt thanks to Andy McBride who was inspired to write this poem having heard her deliver a THINK AMY talk at his Naval base. It is beautiful, please take a moment to have a read:

God requested one of his angels report to heaven.

Over a pub table the decision about a little girls life was filed,

Without thinking they would take the life of an innocent child.

So there it was the decision made,

Tauntons roads the circuit for there deathly game to be played.

A man and woman desperate to save theoretical face,

Deciding to partake in an alcohol fuelled race.

With a deathly assertiveness through every gear,

Every RPM closer to creating every parents worst fear.

Driving beyond their own limited capabilities,

Took it upon themselves to erase Amy’s possibilities.

Amongst this unchartered foolishness control was lost,

A little girl playing on her bike pays the ultimate cost.

The vehicles trajectory altered by a council laid kerb,

The life and breath in Amy’s body permanently disturbed.

No paramedic or a mothers familiar touch to her toe,

Can save her daughters life and end their woe.

No consolation given with the verdict of dangerous driving,

For taking a girls life that could only be described as thriving.

How is that justice for a mother having to bury her little girl,

After these people had such a devastating effect on her world.

A mother was then left not knowing what she should do,

Once a family unit of four, then three and now two.

So The mother who suffered this horrific loss,

Has dedicated her life to getting Her babies story across.

To tell the world of Amy’s rare effervescence,

The magic that was felt whilst in her presence.

To use her story as a way of prevention,

The think Amy campaign a method of intervention.

After the loss of one of her closest relations,

Driven by the grieving, confusion and frustrations.

She shares this message with each and every person,

The smallest detail, the uncut version.

Please learn from these individuals mistake,

If you took a 13 year olds life whilst driving would you be able to live,

If that was me, myself I could never forgive.

So please support this crucial campaign,

Looking at the bigger picture, it’s all of us who will gain.

But most of all think A M Y,

So We can prevent another innocent child having to die.

Listen to our EXCLUSIVE interview with Jane Hofmeister below.