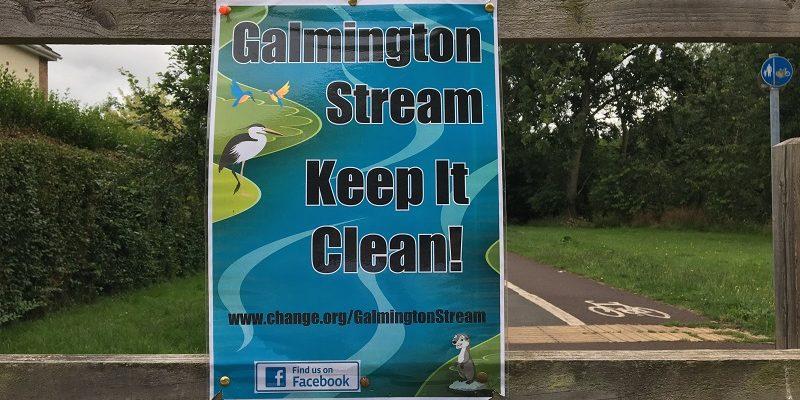 Local residents turned out in large numbers to show their strength of feeling to protect the Galmington Stream from the threat of pollution and flooding from a planning application to build a huge pumping station and sewage overflow station next to it.

Listen to our EXCLUSIVE interview with campaign organisers at the bottom of this page!

The stream runs right through the Galmington Housing estate and has become a focal point for locals to walk and enjoy their natural surroundings and where they could watch kingfishers, wagtails, dippers and egrets as well as see a variety of butterflies along with the odd otter.

The water in the stream which eventually flows into the River Tone is remarkably clear, and is home to a wide range of  insects including dragonflies and brown trout can regularly be seen.

Taunton Deane Borough Council designated it as a nature trail and it has been enjoyed by many people of all ages as a place for a walk, to commune with nature, or somewhere to sit quietly and enjoy the wildlife.

However all of this is now under threat from a planning application for a Foul Water (sewage) Pumping Station, Mains Water Booster Station and Gas Pressure Reducing Station that could put paid to all of the positive things that the Galmington Stream Nature Reserve has provided for so long to local residents and the wider community.

This threat was first made known to those in the area soon after lockdown when Judy Stainthorpe and her husband Andy discovered the planning application by accident on the local council website. They wasted no time in alerting locals to the threat that the Galmington Stream, and its environs were under threat. Judy told Tone News:

The application was only made on March 23rd when lockdown began and not published by the council until May 10th, in the hope that the developers could get it sneaked through unnoticed.

A petition against the siting of the pumping stations has been signed by over 3000 residents in the area and as more and more start to become aware local Councillors have taken up the cudgels on behalf of their community. Wessex Water have also become involved and said that the site proposed for the pumping stations was on a flood plain.

It appears that the developers had indeed been hoping to push the application through during the lockdown as neither the local Councillors nor Wessex Water had been aware of its existence.

The upshot is that the application is in fact invalid and will have to be resubmitted. However this is likely to be far from the end of the story and the Comeytrowe Residents will be keeping an eye on the developers’ next move.

One of those present at Saturday’s gathering was Charlie Ann Briggs who has lived close to the stream all of her life and is a student at Richard Huish College who devised the strap line Galmington Stream, keep it Clean. She tells us:

I have watched this go through the planning stages and its devastating because the developers just break promises and we know that as a result of what they are proposing there will be flooding and pollution.

The developers don’t seem to care about us residents, all they care about is how much profit they are going to make from this development and it just makes everyone angry.

We live here in the ward and what we want is for the developers to go away and rethink their plans, and then come back and communicate those plans to us so we can work together. We have got to think about the environment and protecting our green areas.

From the beginning there has been a lack of communication with grassroots people. The problem is that the developers are not interacting with the council. We went into the lockdown on March 23rd and the developers decided to put in their application at the same time in the hope that people would not notice.

This all suggests that there been a distinct lack of clarity in the way that this matter has been dealt with by the planners and developers. One thing that came across loud and clear is that Comeytrowe residents will fight any plans that threaten their local area.

Apparently, local MP Rebecca Pow who is the Minister for the Environment declined an invitation to attend this gathering.

Listen to our EXCLUSIVE interview with campaign organisers below: