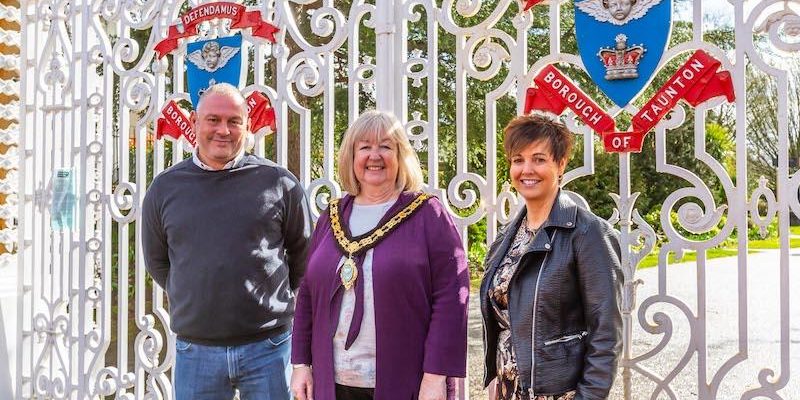 The Mayor of Taunton, Cllr Fran Smith, has given a personal thank you on behalf of the town to a local businessman who repaired the iconic Vivary Park gates free of charge.

Jason Bailey of Montaz Engineering Solutions Ltd responded to an emergency call out from SWT’s open spaces team after the cast iron gates were damaged overnight in February.

Several pieces of the historic gates were found scattered on the ground when staff arrived to open them early on the Sunday morning.

Mr Bailey, whose Taunton-based firm carries out work on the Council’s commercial vehicles, arrived to collect the broken pieces and take them to the workshop at Bishop’s Hull.

Experienced welder Rob Brookes-Wait carefully restored them and made a replacement part for one piece that was missing. He then worked on site at Vivary Park to fix the restored section into place.

The work was completed within four days. Mr Bailey wrote to SWT saying that despite being instructed to undertake this work at the usual rate he intended to make no charge and to offer the repair as a gift. Cllr Smith has told Tone News:

“I wanted to take this opportunity to personally thank Jason on behalf of the people of Taunton for his generosity. The craftsmanship is superb and you can see the pride that has been taken in this work.

The gesture is very much appreciated. I hope it will help people to recognise the calibre of some of our local businesses, the quality of their work and the pride they have in our community and County town.”